These are things I suggest to do after an Arch Linux installation. These are items not covered in the official Arch Linux Installation Guide, but I strongly suggest you do!

For these next steps, we're going to assume that you're logged in as your main user, who has sudo permissions enabled.

Install some networking tools, so we may be able to go online later. NetworkManager is used by most desktop environments to manage network connections, and can be used in the console as well via nmtui.

Use nmtui to go online right now using your wifi.

Install some dev tools. base-devel installs a lot of tools you'll need to compile things, and git is required to build a lot of things from the AUR.

Install a browser. Choose from any of these options (or all!). Chromium is the open-source version of Google Chrome.

Install some basic fonts. ttf-croscore are Chrome OS fonts. You can install more fonts later from the AUR, but we'll get to that later.

(Optional) You can install an older version of the Linux kernel if you feel the latest kernel may be too bleeding-edge for you.

Depending on your setup, you may also need to install an xf86 driver. See this search for available drivers.

You'll need to install a desktop environment and a display manager. You can choose between gnome (default for Ubuntu), cinnamon (default for Mint), deepin, xfce4, plasma and many others. I recommend GNOME.

Start the GDM service right now. This should get you to a graphical login screen! You can log in with your user here and get to a desktop environment.

Enable it on startup

If you were able to log into a desktop environment in the previous step, congratulations! Open a terminal and enable the gdm service to start it up on every boot up.

Set up your swap

If you skipped creating a swap partition like I recommended, you can use systemd-swap to manage your swap.

Mount it on startup

Add your swapfile to /etc/fstab so it'll be used on every boot.

The AUR, or Arch User Repository, contains a lot of community-maintained packages that you won't find in the official repositories. This ranges from proprietary non-free packages (like NVidia drivers). For most Arch users, the AUR is their reason to use Arch Linux, so I highly recommend installing an AUR helper.

You'll need an AUR helper to install packages from the AUR. I recommend yay.

How to use yay

After it's installed, you can use it just like how you would use pacman.

Some AUR packages I can recommend to almost any Arch Linux user: 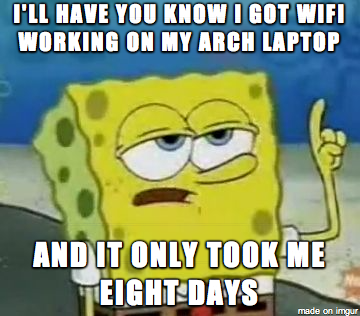 I started this website as a place to document everything I learned. You should know that English is not my mother language. Sorry if you found any mistake or unclear meaning.